In last week’s blog I talked about doing it once and ended with “This process of completions reminded me in asking others to do the same, especially if they are using something of yours.”

I am reminded of kids’ rooms – especially some teens. I do remember coming into a bedroom of a teen and backing out. I wasn’t even going to clean it. There was no floor space to clean anything. It was disgusting. We had a conversation but there was that independent defiance of the teenager “thing” going on. I believe teens can have autonomy over their room, but if there is no floor to clean, I won’t be doing it. I ask for tidy just so it can be cleaned. In retrospect, I made assumptions. Small kids are well.. small kids and need someone to help and teens are well… adult-like. That was my assumption. Teens need to know that they are no longer kids in need of cleaning up after. Lesson one… But I am digressing…

Fast forward over fifteen years to the same person as a grown adult; I’d find when I was away and our home was used, the same behaviour occurred. Things were left for someone else to tidy up and clean – just like when they were a teen. I’d arrive home – even though they have their own home, and while I had the expectation as an adult for them to clean up after themselves, they didn’t. Not really. Not in the way that was the same way in which they’d found our home. 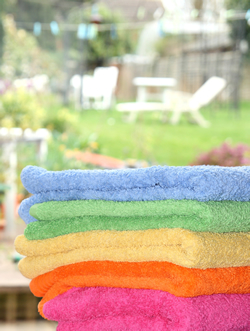 Wet towels in the laundry room, beds unmade, linens on the laundry room floor.  In taking responsibility, I realized I’d taught this person how to treat me, It had become acceptable for them to leave it for me to do. And that needed to change. And I hadn’t had the conversation to request a change in old teen habits that I wanted to see. Lesson two.

So while the conversation did not go over well, it needed to be said. The friction was in asking and expecting a change in a life long habit while in our home as their clean-up behaviour was defaulting to that as a teen. It was about leaving things in better order than which you’d found them.  It’s about organizing one’s time accordingly to clean up after oneself. Like wash and dry the towels you’ve used PLUS fold and return them to the linen closet where you got them in the first place. It is about washing and drying bedding PLUS putting it back on the bed. Not leaving it in the laundry room someone else to do. It’s not just about putting dirty dishes in the dishwasher, but actually washing them and putting them away and cleaning the sink afterwards.

So things have changed. It took having a conversation and the realization that I had inadvertently taught others how I could be treated versus teaching them how I want to be treated. Yes, my home can be used. And yes, I do want to find it in the same shape or better than it was left in. So my question to you: Do you need to have a conversation with anyone that if you could make yourself heard, would change how you felt if they used your “stuff”?